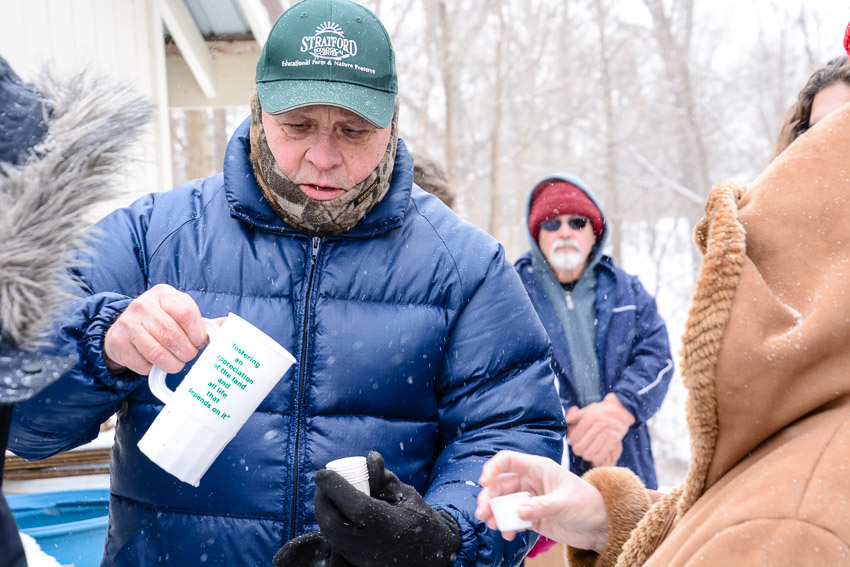 Published in The Delaware Gazette, December 17, 2014

It is much quieter at Stratford Ecological Center on Liberty Road and not just after a snow fall. The Farm and Nature school tours finished in early November, and the 5th grade “Messages from the Earth” program ended the week of Thanksgiving. This was a week later than planned as a six inch snowfall on November 17 caused a two hour school delay, and finally a postponement. The volunteers managed to get in, and spent their usual forty-five minutes setting up activities in the woods, only to retrace their steps and take it all down! But they would be the first to agree it was worth it, just to be out in the striking grey light, and witness every tree and bush outlined in a thick coat of white, and then go out to breakfast.

Next morning the temperature had dropped from 31 F to 7 F and still the Tuesday volunteer farm hand team turned up to work. Fortunately, such cold has not lasted. The men have deftly squeezed the field equipment into the machine shed and begun cutting firewood for maple sugar season.

The flower beds around the Education building are in need of re-design, especially out front where the Tansy and Artichokes have taken over. The garden crew decided what should stay and came up with a plan. The farm hand team moved in immediately and pulled out the diseased Hazelnut trees from the north bed and replaced the rotting railroad ties with left-over locus logs. It looks bare, but you can imagine the Red Twig Dogwoods that will be eye catching next winter.

Once we get a day with warm, drying winds Farmer Jeff will arrange another mucking out of the barn, before we bed the animals down for the winter. This will help with disease prevention, and avoid the bedding becoming too high as we add dry straw.

The livestock are grazing in field 5, in what we call the “out of sight” end. They finally moved there for the better forage, despite the fact they are not comfortable when unable to see the farm buildings with their sense of security. They have a right to be cautious because we lost a young Shetland ram recently in the farthest corner of the North Pasture adjacent to the prairie, where predators tend to lie. We are not sure what took Henry down. Normally the Llamas protect the animals, but the small Shetland breed of sheep tend to wander off by themselves and become more vulnerable.

The hens in the children’s Garden are now looking very healthy after being separated from the orchard hens due to bullying. One was luckier than Henry when she came face to face with a bird dog visiting the farm family for the weekend. We do not keep dogs on the farm, as they cannot be trusted either with the animals or the children. This particular dog loves to run, is ok with the cats, and has not misbehaved in the past. However, when he saw a hen with a habit of escaping from the coop, he could not resist clamping her in his jaws. He ended up with only a mouthful of feathers and the hen was scared enough she has stopped getting out.

I called an ex-dairy farm friend in England in mid October to wish her Happy Birthday on her 91st Birthday. Dorrie and her husband became my close friends when I kept their milk records and paid the bills, and later enjoyed a stint of milking. Dorrie’s long term memory was still good, so we talked about the days when she first came to the village from London in WW11 as a Land Girl. She worked for her future husband’s father doing anything on the farm, including delivering milk. She lived in lodgings where she was never given enough to eat to satisfy her healthy appetite. When she put the milk on people’s doorsteps she said she could smell their roast beef cooking, and longed to eat it. She later found other accommodation with Mr. Woodcraft and family. He was like a little elf with a lovely smile and fed her well. Dorrie passed away in late November but I still have all my memories, especially when she fed ME so well on English fruit cake, crusty bread, creamed honey and instant coffee, made with fresh full fat Friesian milk.

Stratford closes for the holidays at noon on December 23 and will be closed through January 4. A full calendar of activities for 2015 is scheduled for publication in January. There are new opportunities to become involved including a monthly photo club, a spring and fall Small Farmers program, a July weekend adult farm camp and a fall Earth Institute discussion course called “Choices for Sustainable Living.” We wish you all the best during this festive season and for the coming year.

“Farm Connection” is a monthly article connecting city folk to life on the Stratford Ecological Center farm. It is published on the third Saturday of the month on the farm and garden page of
The Delaware Gazette.