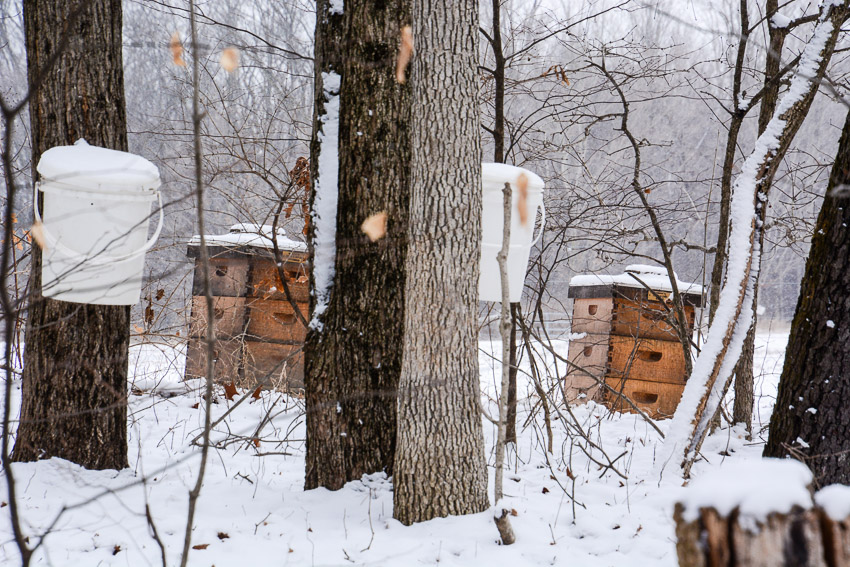 Published in The Delaware Gazette, January 17, 2015

It was good to return to Stratford Ecological Center on Liberty Road after the holidays and catch up on farm life. The weather had turned cold again and it snowed on January 6. Farmer Jeff shared that he seized a window of opportunity on New Year’s Day and ran the one-row corn picker in field 6.

Two varieties of corn had been planted, the best of which would be planted again in 2015 if available. This is never a sure thing, as the seed is not always on the market year after year. With last years wet summer causing stunted growth it was a pleasant surprise to hear the short stalks produced two good size ears. A few rows of corn, which look like lines of waving flags, have been left standing; these are known as “Conservation Strips.” A variety of government programs offer financial incentives to plant buffer strips amongst row crops to prevent erosion, build up soil nutrients, and provide habit for songbirds, beneficial insects and wild life.

In December April Hoy, Stratford’s Education coordinator, and two interns guided our three llamas on the trail to the Sugar Shack to prepare them for carrying sap during sugaring season. Curzon, the calmest and oldest in his mid teens, led the way. He appeared to be in good health, and it was a shock to learn he had died on January 3. His body was taken to an animal sanctuary for burial. It will be some time before we get over not seeing his brown and white face amongst the animals.

The rest of the livestock are keeping well and warm, spending most of their time in the barn. The Tuesday farm hand team fastened some new metal hay feeders to the side of the pens, to avoid feeding hay on the floor. Not only does it avoid waste, as the animals refuse to eat the hay after treading on it, it allows the smaller animals to move in after the larger ones have had their fill. We have plenty of straw available for bedding so we will not miss the hay. But the feeders will need strengthening as the goats have discovered they can climb on them!

We plan to soon begin feeding the cows with the haylage we made last summer, and stored in white plastic beside the prairie. The cows are expected to calve in March. The haylage will “flush” them with nutrients to ensure healthy calves, who can endure the rigors of the first few months of life. We did not want to start feeding it too early, and risk running out and returning to dry hay, because once they taste moist haylage they distain the hay. We hope the goats and sheep will also take to the haylage. We intend moving the bales, using our new two-prong attachment on the tractor, to the metal feeder in the North Pasture. The field gates are set so the animals have continual access.

It is a pleasure to walk out to the pond under a blue sky with snow on the ground. The paths through the prairie are more visible, and the snow has pushed down any low forbs and grasses, making it easier to walk. The dried plant stalks remaining upright beside the paths add beauty to the scene, and the possibility of spotting feeding birds and even insects. It seems everywhere you look at Stratford there is something interesting to see. Perhaps even more so in winter when the view is open, and this stimuli makes it well worth wrapping up and leaving the fireside.

A new Photography Club started this week and will continue every third Thursday of the month. It offers an opportunity to walk the fields and forest for the perfect photo, as well as time to share knowledge with like-minded photographers. All skill levels are invited. Cost is $10/year and no reservations are necessary.

For those interested in attending an information session about this year’s bee keeping apprenticeship program, opportunities in January and February are listed on our website. They are free and you can just show up, although it always helps our Apiarist, Dave Noble, if he has some idea who is coming. Maple sugar volunteers are encouraged to sign up for a variety of duties including tours to the sugar shack, cutting firewood, tree tapping, collecting sap, and cooking the sap. Folks involved with this operation are often different from our spring and fall farm and nature tour guides, and find their own enjoyment in this unique opportunity.

Families or groups of friends are invited to sign up for a behind the scene tour every half hour from 10 am to 1 pm. on our Maple Sugar Saturdays, February 21 and 28. The cost is $3/person. The annual Maple Sugar Pancake breakfast, including a hike to the Sugar Shack and visit to the barn, is scheduled for Saturday, March 7, from 8 am to 1 pm. Reservations required for five separate breakfast sittings and the cost is $10/adult and $5/child.between ages 2 and 12. I am looking forward to helping out in the dining room.

“Farm Connection” is a monthly article connecting city folk to life on the Stratford Ecological Center farm. It is published on the third Saturday of the month on the farm and garden page of The Delaware Gazette