Knox and Socks Born at Stratford 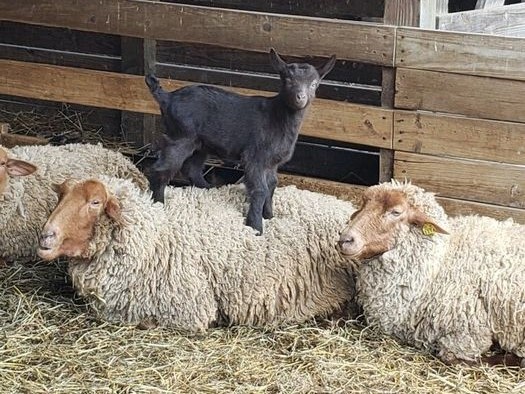 Officially the first day of spring was yesterday and how welcome it is to leave winter behind! It seems unbelievable that just over two weeks ago children at Stratford Ecological Center on Liberty Road were happily making snow angels, and volunteers were wrestling with frozen sap bucket lids and frozen sap. Ever since daylight saving time began on March 8, the weather has turned warm enough to go outside without a coat, and the signs and sounds of spring are really picking up.

Farmer Jeff was spot on with his prediction of lambs by the end of February. Two sets of twins were born during Maple Sugar Day on Saturday, 28th. The first set timed it beautifully to arrive at noon as people came into the barn from the sugar shack. As one visitor shared “You sure know how to put on a show here!” At last count we had fifteen lambs, and the oldest were allowed out with the ewes into the area east of the barn, which we now call the “Backyard.” The brown fuzzy-coated lambs, some with white top knots, literally did the proverbial “four hooves off the ground” bouncing as they left the barn.

A week later the Maple Sugar Breakfast drew over five hundred people to savor our own sausage patties and participate in a variety of activities. Some folks did not want to know which pig supplied the meat. We understand, but let me just say an older pig produces extremely tasty sausage and once again I extend my thanks to her.

Those of us busying ourselves in the dining room and kitchen heard there were mule rides to the sugaring operation. We had visions of mules pulling a wagon over the thawing ground. It turned out volunteers Cheryl and Lloyd Hagerty had generously loaned their four wheel drive “Mule” to pull the wagon. The compact “Mule” worked really well. I am not sure real mules could have done the job, but for sure they would have left a different foot print!

The farm and nature tour guides spent two days in training last week. April Hoy, our Education Coordinator, strongly believes in Stratford’s approach of hands on learning, and it wasn’t long before we were outside. April led us down the driveway towards the vernal pools, which are often overlooked in favor of the farm and nature preserve. There is a U-shaped path to the pools through the north woods. We used the second entrance to reach them quickly. It has been known for some who choose to take the first to become disorientated, and never arrive at their destination! Upon reaching the water it was like magic to look back at the sunlight glittering off the thin layer of ice on the leafless trees.

This area is known as the Button Bush Swamps after the bushes that happily make their home in the wet conditions. These bushes, whose summer flowers resemble white pincushions, provide erosion control and food and shelter for a long list of critters. At the right time of year you can find salamanders, frogs, insects, butterflies, birds, ducks, snakes, turtles, beetles, deer, muskrats, flies, and even mice in the bushes. The pools themselves provide habitat for tiny critters that form an important part of the local food chain.

No wonder April was eager for us to understand the ecosystem of the vernal pools, as there is so much happening in an area which at first glance looks like a “swamp!” We were a fraction too early to see the first salamanders that would cross the driveway on Friday night, March 13, after being buried underneath logs and leaf litter in the preserve since last summer.

By the beginning of this week the snow cover had disappeared. The cattle wandered down the lane snatching bites as they explored. They must have been pleased when they found themselves in field #6, amongst the short corn stalks and fallen kernels. They ate with gusto, regardless of the fact that most of the kernels go straight through their digestive system and end up back on the ground. The darker brown Jersey called Pumpkin is expecting her first calf, and her udder is rapidly filling out.

We invite you to come out with your camera to capture the new life in the barn, eight eggs incubating in the classroom, and the rapidly growing plants in the greenhouses and spelt fields. Sap collection will be over as the tree buds start “punching out,” which happens when temperatures begin to reach sixty degrees. We expected to produce half as much maple syrup this year due to record low temperatures. However, sap collection has been excellent this week, and we now anticipate reaching our average of 20 gallons.

Pauline Scott is a farm and nature guide at Stratford Ecological Center, 3083 Liberty Road, Delaware. She can be reached at 740-363-2548 or by email at info@stratfordecologicalcenter.org. Website: StratfordEcologicalCenter.org