Knox and Socks Born at Stratford

Foraging for Wild Plants at Stratford 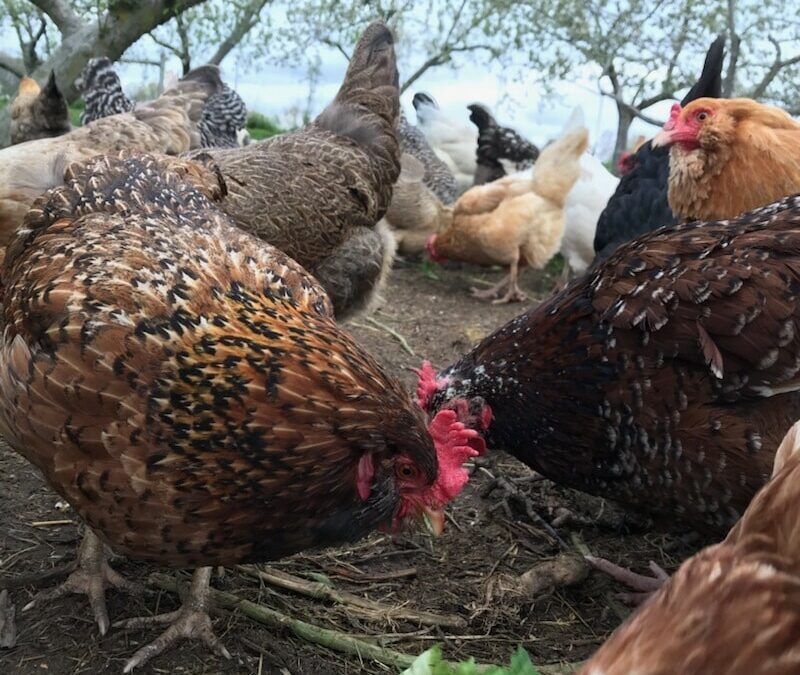 If you decide to visit Stratford Ecological Center on Liberty Road on a Tuesday, and you want a quiet experience, wait until eleven o’clock. Early Tuesday morning is the busiest time of the week, with a constant stream of people arriving for myriad reasons. The packed parking lot looks like Harvest Fair.

This week there were 50 fifth-graders attending the spring program “Messages from the Earth,” and “Story time on the Farm” drew 55. The Tuesday farm hands and gardeners totaled 17, and the invasive species removal team had a record 6 people. The latter group was made up of leader Bob Harter and young adults. Their faces reflected the pleasure and satisfaction they found in their work. We are glad of this response even more than the piles of uprooted honeysuckle that they generate.

By mid morning it was hard to imagine such a crowd; there was hardly anyone to be seen and peace reigned. The youngest children were in the barn and yard, the oldest spread out in the woods, the farm hands engrossed in their projects, the women harvesting in the big greenhouse, and the removal team pulling out the unwanted plants. It was easy for me to relish this scene, after experiencing congested traffic in downtown Dublin the previous day.

The last of the maple syrup has been bottled in sixteen-ounce glass flagons. The final total was fifteen gallons, down from other years. It is available for purchase in the Education Building. If you like syrup with strong flavor then request a bottle with number 9, 10, 11 or 12 on its lid. To avoid the disappointment of spoiled syrup, don’t forget that unlike honey, maple syrup needs refrigerating after opening.

Pumpkin, our four year old Jersey heifer, gave birth on the Vernal Equinox, March 20. She is now officially a cow. The fine-boned brown bull calf, sired by a Red Devon bull is a beauty. He was eventually named Knox! Two weeks later during the night of April 3, Sugar, our ten year old Jersey cow, settled on top of haylage on a high spot behind the barn and delivered a healthy heifer. With a patch of white on her golden coat, and two very obvious white socks, I will let you guess her name! Sweet Bessie is hanging in the barn not far off calving and Sassy will be last.

Sugar’s last birth in 2012 produced twins and we allowed them to suckle her, and not try to take any milk for ourselves. Now three years later and getting up in age, Sugar would not tolerate being hand milked. Instead we plan to school her calf for milking. This entails walking her in a halter, just like we do with the llamas, so she becomes used to being handled and tied up in a stall. By the time she calves at around two and a half, there will be no time consuming battle to tie her up or any danger from a deft kick.

The first two chicks hatched in the incubator at the same time Sugar’s calf arrived. One is yellow and named Egglintine, the other with yellow and black stripes is Snickers. We don’t know which hen laid the eggs but we do know the rooster was a breed called Araucana, as he was our only rooster at the time of fertilization.

Unfortunately, they were the only two live chicks out of eight eggs in the incubator. Two chicks were formed but died in the shell, and the other four were infertile. We often wonder what percentage of the eggs produced at Stratford are fertile. Fifty percent is on the low side. We are incubating another eight, turning them more often and hoping for better results.

These days broodiness is a trait that has almost disappeared from the majority of hens. It is much more economical to take the eggs and incubate them artificially, than to let a hen spend three weeks sitting on the eggs and not laying during that time. As an experiment we marked five eggs, and left them in a straw nest on the ground in the chicken coop. Any additional eggs laid in the nest are removed. We noticed there is usually a hen sitting on the nest, but not necessarily the hens who laid the eggs. She rotates the eggs on a regular basis with her beak to ensure the heat is evenly distributed, and to avoid the chick sticking to the side of the shell. Only time will tell if we successfully hatch chicks in this unorthodox manner with more than one hen sitting on the same eggs.

A few straggler sheep are just now having their lambs so it is still not too late to come see newborns. It is also time to keep your eyes open to spot the first of the goat kids. The early wildflowers are popping, together with the redbuds, spice bushes and buckeye trees. The bluebirds and tree swallows are back and looking for places to nest. The spelt and grass has greened overnight after the latest lightening storms. As usual spring is an exhilarating time to renew yourself, and you are welcome to do it at Stratford.

There is still time to register for the Edible Plant Id Walk and lunch on Saturday, April 25, from 11 – 1 pm. at a cost of $20. On the same day, as part of Earth Day activities, we invite you to join us from 9 until 1:30 pm. to plant tree saplings or pull garlic mustard. A Wildflower Walk for Adults is planned for May 9 from 10 – noon, a time when more flowers will be in bloom. Cost is $5. An evening talk from 6 – 8 pm. on the Plight of the Pollinator takes place on May 14 and costs $10. Please call to register for these events.

Pauline Scott is a farm and nature guide at Stratford Ecological Center, 3083 Liberty Road, Delaware. She can be reached at 740-363-2548 or by email at info@stratfordecologicalcenter.org Website: StratfordEcologicalCenter.org