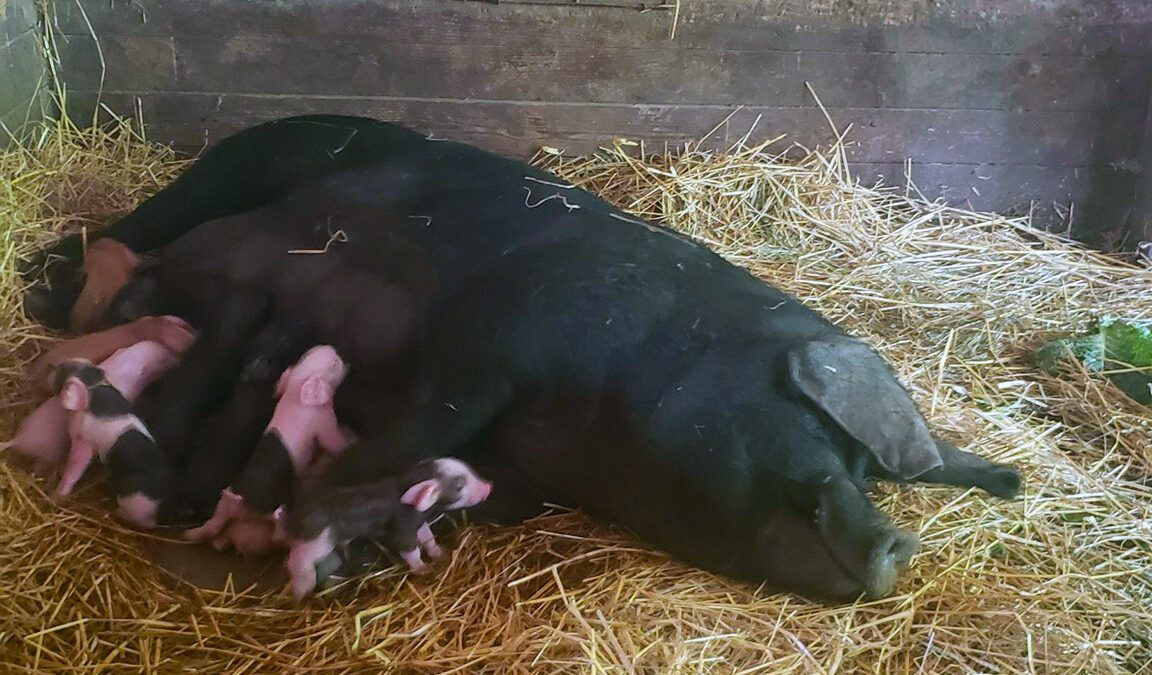 The month of April brought Stratford Ecological Center less showers, but judging by the lush grass‐filled fields and the bright wild flowers in the nature preserve, the lack of moisture has not affected growth.

Ohio’s winter snow cover acted as a blanket and provided moisture deep into the ground as it melted. With cold temperatures during January and February well above zero, the trees and plants had an easier time. Coupled with an exceptionally warm April, with only scattered hard frosts towards the end of the month, everything from the fruit trees to the perennials are weeks ahead.

The wild hyacinths, the jewels of Stratford and normally the last of our wildflowers to bloom, around May 20, are already starting to color the woods. Our other stars, the white, drooping and sessile trillium, are all in flower. A first grader’s face changed from a look of disinterest in Stratford to open triumph, when he showed me my first drooping trillium of the season, with its flower tucked under its leaves.

We plan to make our first cut of grass for hay in the first or second week of May. The early high temperatures, no humidity, and the rain pattern swinging around Ohio indicate a dry summer. The faster we can fill our hayloft the better so we won’t have to worry about a drought reducing the grass yield. The llama and goats wandered through the healthy fall‐planted spelt in the field beside the lane, and enjoyed a tasty meal. Nibbling triggers the spelt to send out more leaves, to ensure survival, and in some cases two seed stems. This doubles the yield of this high protein grain.

The prairie had its annual haircut. Geri Peffers is now able to drive across the stubble to monitor the bird boxes. A group of children were fortunate to observe her efforts as they returned from the popular activity of catching and releasing tadpoles and spying on the muskrats in their cattail houses on the pond. Geri opened the box, expecting to find five blue‐colored bluebird eggs. Instead, she discovered a sparrow’s untidy nest of feathers, grass and oddments built on top of the bluebird’s neat, hollow‐centered nest. There was no sign of any eggs in the nest or on the ground. It was a disappointment and Geri rid the box of the sparrow’s nest and set a trap to prevent rebuilding.

Sugar and Molasses returned from Sylvia Zimmerman’s dairy farm. Jeff will examine Sugar in a few months, by palpating her, to find out for sure if she is finally in‐calf. He also brought three, week‐old, Jersey bull calves, born around April 1, to be raised for meat. Their big eyes and long lashes melt your heart. They are presently bottle fed and housed in the barn.

The sheep were sheared on April 8 and their fleeces used in three “sheep to sweater” all‐day workshops, two for home‐schooled children and one for adults. Two ewes presented us with triplets and a single in the middle of the month. Since then it has been non‐stop birthing by the ewes and nanny goats. Our black Shetland sheep, Hannah, had a little black lamb. The brown, friendlier Shetland, Jessie, was not mature enough to get in lamb. Our third Shetland, Storm, is due any day. One goat timed her delivery perfectly, with a little assistance from Stratford’s Development Director, David Hoy, by dropping twins in front of a group of women gardeners making an unexpected visit.

Two yellow chicks hatched in the incubator on Earth Day. Two orphan ducklings, rescued from the highway after their mother was killed, joined them under the heat lamp in the classroom. The joys and sadness of life and death are part of farm life.

Death happened this year as one nanny tried to push out a breach position kid and it didn’t make it, nor did its sibling, but the third triplet is alive and well. Another kid found herself on the opposite side of the gate from her mother. It didn’t take long for her to chill in the wind and her stomach to empty. Despite loving efforts to warm her in the farmhouse kitchen and encourage her to suckle, she did not make it. At the exact same time out in the barn a goat gave birth to a single and she’s thriving. It is a fine balance, yet we go on with the business of farming.

Family Farm Chore Day takes place on Saturday, May 8 from 9.30‐11.00 am. Limit 6 families. Care for the animals by feeding grain and hay, filling waterers, gathering and washing eggs, and milking the goats. A Wagonride and Campfire, is scheduled for Saturday, May 22, 7.30‐9.30 pm. We will sing songs, and tell stories at the pond. Both events require registration please.