Signs of Spring are Everywhere at Stratford Ecological Center

More Than Fish Get Hooked at Stratford Ecological Center 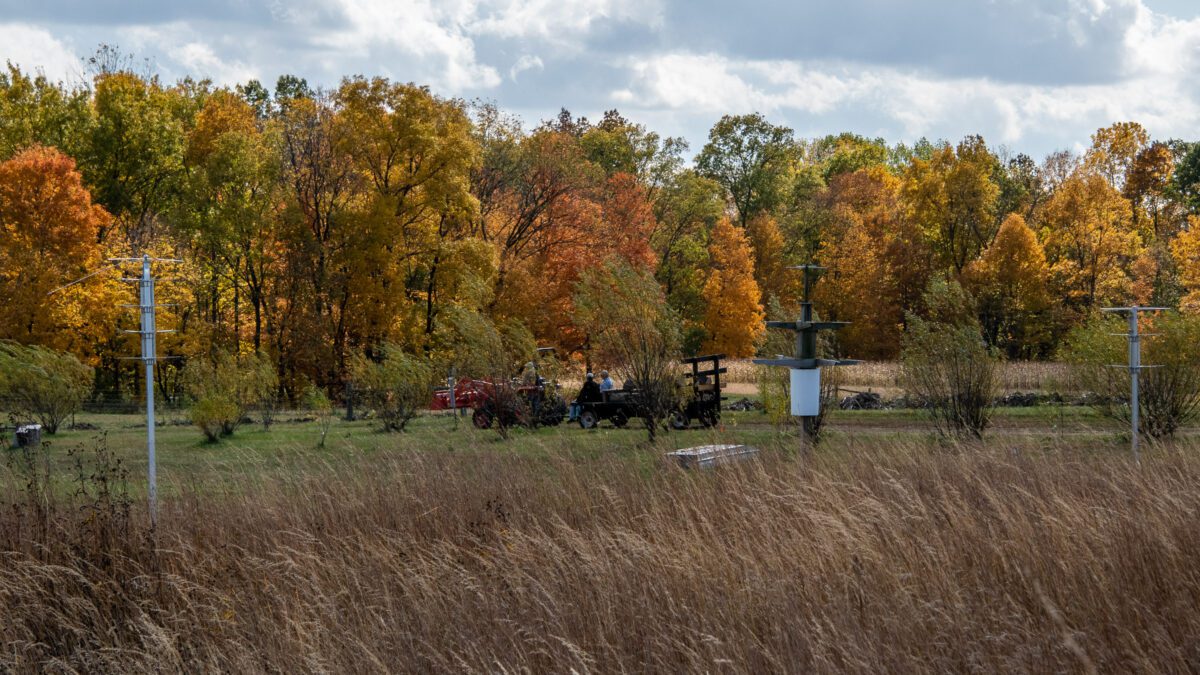 Every year since the loss of thousands of ash trees at Stratford Ecological Center on Liberty Road, volunteers have planted different replacements during Earth week. This year we concentrated on native varieties that are useful to wildlife. The 350 young saplings included: Witch-hazel, Hazel (American Filbert), Dogwood, Elderberry and Red Bud. They were planted as the trees prefer on the edge of the woods for optimum light.

For the last eight years serious efforts have been made to remove the invasive garlic mustard in our 95-acre State Nature Preserve. Spearheaded by volunteer coordinator Jane Walsh, the efforts of the queen of mustard pulling, Martha, and other volunteers, was clearly visible this year. There were only a few plants to pull, and it appears we have succeeded in breaking the seven year cycle so our attention focused on the wildflowers, which have flourished amazingly quickly in the cleared ground.

April showers have persisted into mid May and Farmer Jeff has taken advantage of every dry day to cultivate and plant where possible. Oats, orchard grass and alfalfa are establishing themselves in the South Pasture, following last year’s corn.

After a second cultivation to control the weeds, corn will follow last year’s grass in half of field #6, with the rest again in forage. For the health of the soil and animals, we often plant half of a field in forage as part of our rotation. After grazing we can rest the small area to break the worm cycle, and allow the grass to grow for further grazing or hay.

The spelt in field #5 will be lightly grazed if weather permits by the sheep and goats. Their hoof prints will aerate the soil by breaking up the pan formed during the winter. All the corn is off field #7, which will be planted in oats for hay and buckwheat. Buckwheat is a valuable addition to our hen and hog feed, and as a nectar source quadruples the amount of honey produced by our bees.

In field #3 beside the blackberry bushes and in field #6 around the corn, OSU is carrying out a research project. They are installing 25’ x 45’ beds and planting them with peppers, partridge peas and buckwheat. These crops attract beneficial primary predators and parasitoids, and the hope is there will be enough to eliminate the Brown Mormorated Stink Bug who favored the berries and corn. The bugs are causing concern not only to home owners but to farmers, as they can spoil the appearance of fruit and vegetable by piercing the skin to suck out the moisture. Rutgers University initiated the project and then enlisted the help of OSU to find farms like us to conduct “on farm research.”

Dave Noble, Stratford’s Apiarist, is moving forward with dividing hives and re-establishing the hives lost during the winter. We now have 17 active hives. For the first time since installing the bees last spring there is an excess of honey to the bees’ needs. The bees have fed judiciously on the Buckeye, Black Locus, the spectacular blooming apple and pear trees, wild flowers and spice bushes. The fleeting apple blossoms were at their peak around May 6, setting a record with three consecutive years of heavy bloom.

Apiarist Dave removed the lid of the most productive hives, placed a thin wire mesh layer over the opening to prevent the Queen Bee climbing out, and added another box known as a “super” on top, containing empty combs. Once the new combs fill, he will extract our first honey. This will be a mile stone which calls for a celebration.

New life arrived on the farm in the form of two goat kids born a week ago. All is well and more are expected. About the same time Sugar’s 20-month-old twin calves, and last year’s calves from Sweet Bessie and Sassy, were separated from their mothers and finally weaned. It is perfectly natural to hear the calves and cows bellow about their loss all night, and even for the next few days! It is disconcerting, but none were hungry or in pain, simply missing each other. The cows will now hopefully turn their attention to the 3 year old, 1500 lb. Red Devon bull, on loan from John Van Gundy. It is difficult to find someone willing to loan a bull, and we are again grateful to this Delaware dairy farmer.

The summer and fall 2014 program calendar is now available on-line and in the foyer. Our regular favorites like Story Time and Book Talks continue. On the 2nd Wednesday of each month from 6–8 pm. scout leaders are encouraged to bring out their groups to earn a badge. Next Tuesday on May 20 from 9-1 pm. there is an opportunity to visit another farm for a hands-on working of cheese, instruction, tasting and lunch at Sylvia Zimmerman’s dairy west of Delaware. Back at Stratford, cooking classes using seasonal ingredients, are scheduled for both children and adults led by Chef Mark. Apiarist Dave will be on hand on June 5 from 6-8 pm. to take you on a tour of the world of the honeybee. Additional details and registration information can be found on our web site.