Is it Another Phantom Pregnancy for Rosie? 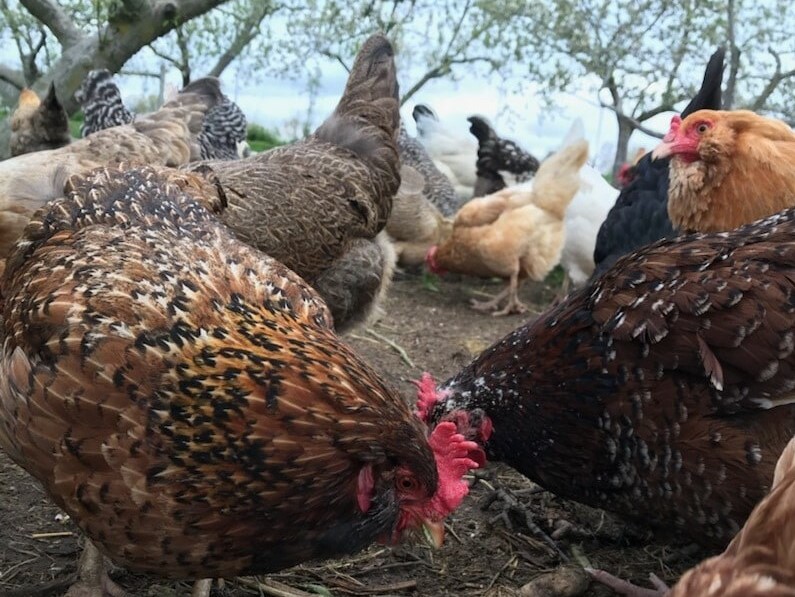 As the temperatures rose above freezing during the day, and dropped below at night, the sap flowed in the maple trees at Stratford Ecological Center on Liberty Road, and we were able to collect it. We are not fussy about the maples we tap, but we prefer the sugar and black, rather than the red maple, as the sap is sweeter and their buds expand later. Once the buds start to break open the sap becomes bitter and heralds the end of the sugaring season. Our trees grow in mixed woodland creating competition for size. A maple tree grown in an open setting forms a bigger crown and can produce twenty gallons of sap, twice as much as a woodland tree.

After tapping 150 trees we have processed some four hundred gallons of sap in five batches, yielding ten gallons of maple syrup. We hope to double this figure. We continue to use the old evaporator, despite the possibility of it developing a hole in the bottom, as the new one requires adjusting to fit the hearth. The lane is saturated and we cannot move the necessary tools to the sugar shack to fix it.

As a result of efficient photosynthesis in the maple leaves last year, this year’s sap sugar content is high. The sugar was stored in the tree wood during the winter, mostly in the form of carbohydrates, and then converted to sucrose. This dissolves in the sap as it flows up the sapwood, a narrow strip located 2.5 inches into the trunk. The syrup is on sale at Stratford for as long as supplies last.

The animals have fared well despite the cold and snowy conditions. We have not been able to use the front‐end loader to clean out the cattle pen. The loader is the worse for wear after it tried to pull a large tractor out of the snow. To avoid more manure in the barn and conserve our bedding straw, we have fed the cattle their hay in the barn yard. The hay for the goats and sheep is spread on their pen floor and any excess will become bedding.

Lambing starts in early April. Kidding starts in May. Our Red Devon cow, Sweet Bessie, is due to calf on June 23. Jersey heifer Molasses, aka Honey, born on Harvest Fair September 2008, is due on September 16 and remains at Sylvia Zimmerman’s farm. But will not be there for much longer, as she is in the dog house for suckling on Sylvia’s dry cows. Pigs, Rosie and Roja, are pounding on the weight so surely they are pregnant.

We have not yet moved the older hens out of the orchard to join the younger chickens. We felt no pressure as the orchard has stood up well under the wet conditions, whereas the area surrounding the hen house in the children’s garden is a mud bath. That is not the only reason for holding off the move. The chickens are not in the best of shape physically to counter any bullying by the older hens. In fact, due to their disdain for exercising in the snow, the chickens can best be described as porky, with a girth larger than it should be for their age! Consequently, they are not very spry and an easy target.

The chickens should start laying eggs this month but they don’t seem to have learned the knack of roosting on the wooden ladder, an instinctive reaction to protect them against predators. At this rate we don’t hold out much hope they will progress to roosting in the nesting boxes by month end and start producing those long awaited eggs.

The hay crop has experienced no winter burn due to the snow blanket. It is so wet on the farm we cannot take any machinery over the ground without incurring 12” ruts, which would take forever to smooth out. It will be April before we can begin any field cultivations, not unusual on the Stratford farm. We may try and graze the buckwheat and sunflowers in the north boundary field, left standing last fall, before we plant the oat/alfalfa mix. The greenhouse holds an abundance of arugula, spinach, kale, chard, culinary dandelion, mustard greens and miner’s lettuce all available for u‐pick.

A new weekend opportunity to tour Stratford’s farm and woodland will be offered the third Saturday of the month, starting on Saturday, March 20 from 10.00 until noon. Dress for dirt. Be a child for a couple of hours as you enjoy using all your senses. Adults and children welcome. Cost $5.00/person. Reservations are necessary please.

Kid’s Nature club resumes its monthly fourth Saturday meeting on March 27 from 10.00 until noon. Children ages 6‐12 are invited to tend the giving garden and donate the vegetables to PIN in Delaware, become involved on the farm and explore the woodland. Cost $40 through August. Please call April to enroll.

Hopefully, spring will arrive in a glory of warmth and new life on March 20 and snow will become a distant memory. I can hardly wait. Come out and experience it with us.