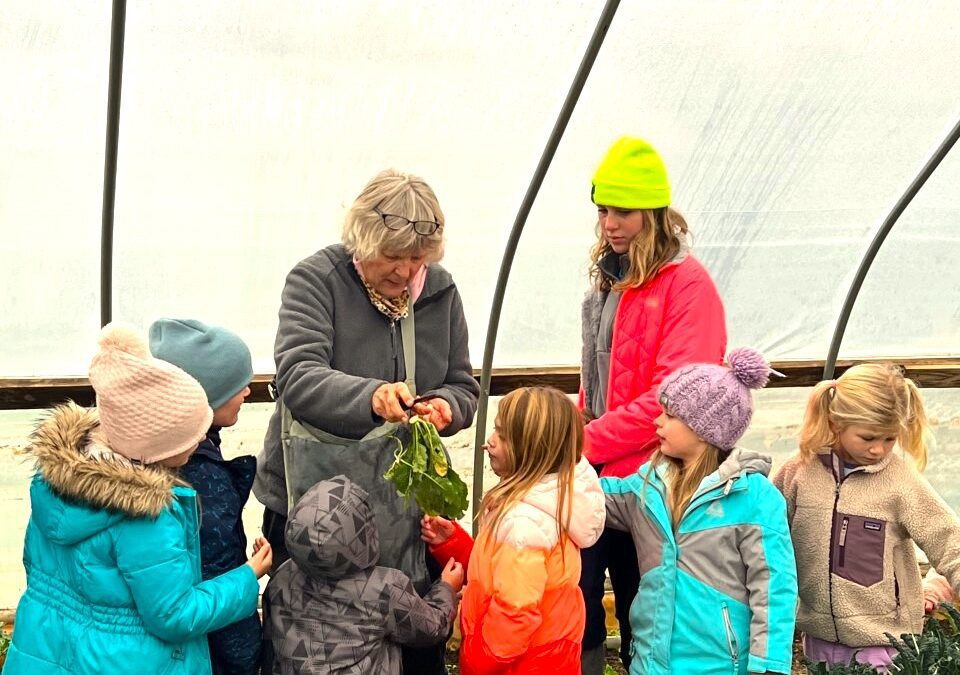 The rain held off for the Herb Group Children’s Tea Party on August 4 at Stratford Ecological Center on Liberty Road.  The Group has offered the hands-on event for young children since 2013 and it continues to be a sell-out.  They experienced some loss of membership during covid, but fortunately committed new members gamely signed up to help.  The children collected eggs, tomatoes and cucumbers and made open-face sandwiches.  They picked strong smelling herbs for their own jar of hot tea.  We provided herb-flavored cookies, lemon tarts, and fruit salad.  A dilemma for the new members was averted when no one asked, during sandwich prep, why the eggs were hard boiled!

We installed two large tv monitors in the big room a few years ago.  They have been a great asset in sharing information during a variety of meetings.  We went one step further a month ago when we purchased 2 microscopes, both with a built-in camera, which allow us to send images through HDMI to the monitors.  One microscope is a stereo scope with a magnification of 20X and 40X, used to look AT rocks, insects, plants and similar sized objects.  The other is a compound scope with a magnification of 40X, 100X and 400X, used to look at and INTO small objects like protozoa, algae and other microorganisms.  Next year we hope to offer classes on the use of these new microscopes.

The grass in the Paw Paw Coop was given a chance to regenerate, and after flourishing has been cut, the chickens are now allowed to roam freely.  On August 11, the narrow brick patio, laid on top of the new drainage tile around the coop, was completed by Farmhands Mary and Gary and Interns Molly and Savannah.  The daylilies were tidied up on either side of the entrance door, and it only remains to be seen whether the area remains dry after the next heavy rain.

It was good news to learn that almost an acre of fast-growing sunflowers were planted in field 3.  They provide pleasure to all, and the school children love to walk through a sunflower maize, pick a flower head and push it through the wire fence to feed the chickens.  In the same field four rows, two hundred feet long, have been planted in green beans for delivery to People in Need.

A planting of buckwheat, rye and oats now surround the corn in fields 3 and 6.  The hope is that they will provide a diversion for the deer this fall, and the corn will remain intact.  Due to the lengthy drought after planting and then heavy rains, there are some sparse patches in the corn.  Farmer Jeff has been able to get in and cultivate between the rows with the Lilliston cultivator to eliminate the ragweed.

On August 11 Jeff led a tour group from the ROAR Academy to witness first-hand the effect of climate change on the soil.  He showed them the North Pasture, which had been sacrificed this past winter to the cattle for grazing.  Their hooves usually open up the ground and their manure fertilizes it.  However, upon close inspection the top layer of the soil was found to be heavily compacted.  The nutrient levels were lower than when Jeff began raising them thirty years ago.  The rain falls so heavily these days that it creates a pan on the surface, preventing the absorption of water and air.  This affects the balance of everything in the soil and results in nutrient-deficient crops for human and animal consumption.  The group were also taken to the prairie where one would hope the undisturbed deeply rooted soil would absorb the rains and retain its nutrients.  However, even here they found the soil was no different than in the North Pasture.  This was a stunning and disturbing revelation for our future food production, with no quick fix at hand.

Farm camp for 3-5 years old ended the season on August 12. This past week the camp interns cleared up, and by midweek had left to pursue their lives off the farm.  It has been a good summer and we are thankful for their efforts to ensure the camp experience was the best possible, we wish them well.

We need more volunteers for all our programs, but especially for our fall Messages from the Earth 5th grade science program, and our Farm and Nature tours.  In order to share the many volunteer opportunities, we are hosting an Open House at the farm from 4-7 pm. on Wednesday, August 31.  To RSVP, please visit our web site under event calendar and let us know you are coming.  Our open hours to the public should increase this fall and the latest update can be found on our web site.

Pauline Scott is a farm and nature guide at Stratford Ecological Center, 3083 Liberty Road, Delaware.  She can be reached at 740 363 2548 or by email at info@stratfordecologicalcenter.org Stratford’s website is www.StratfordEcologicalCenter.org