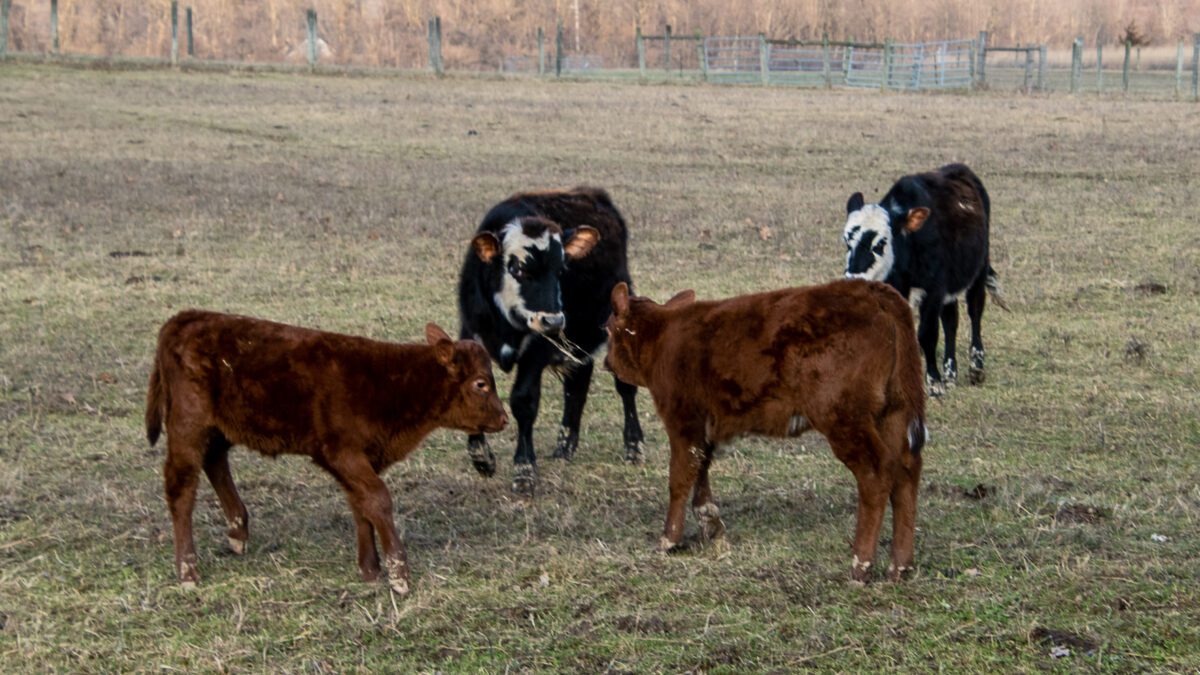 Published in The Delaware Gazette: February 2, 2012

On a grey day in the fourth week of January, I took a walk through misty rain to shake off the cobwebs and check out the farm at Stratford Ecological Center on Liberty Road. It would not have made any difference which day I walked that week, as the weather pattern remained the same, with higher than normal temperatures. It was good to be outside stretching my legs and looking over the fences in typical farmer fashion.

The young pigs really churned up the soil, while digging up the turnip roots in the North Pasture, especially in the wetter areas. Farmer Jeff Dickinson said not to worry, as the pigs and field benefited from each other and the ground could eventually be smoothed.

All was quiet as I passed the white beehives in their secluded corner, on the edge of the woods near field 6. This year we are looking for want-to-be beekeepers to help manage the hives. According to Farmer Jeff you never stop learning as a beekeeper, which must be great for the grey matter! He added that he would never attempt to farm at Stratford without our own bees to pollinate the crops, vegetables and flowers. If interested and you have experience, or would like to learn bee keeping skills, please contact Jane Walsh, volunteer coordinator, at Stratford.

Gabe Ross, Stratford’s Assistant Farmer, stopped to speak to me on his way to the maple sugar shack, where he was checking on supplies. He shared that he and volunteers would be tapping the sugar maple trees in late January, and they hoped to start collecting the sap the first full week of February. This would be two weeks earlier than normal, due to the higher day-time temperatures. The sap flows when it gets above freezing during the day and falls below freezing at night.

The woods looked stark in the low light and it seemed as if every bird and animal were hibernating. It was harder this year to imagine the masses of colorful spring wildflowers that will appear out of the dormant ground. The openness allowed me to see the huge trees and limbs downed by last year’s ice storm and to marvel at their age. The stream showed activity, and looked attractive as the water undulated over submerged rocks and sand bars. I was surprised it was not higher, but I could see evidence of earlier flooding.

The cattle’s warmth was welcome when I stepped into the barn. They were all standing in the first pen, despite the fact the gate to the barn yard was ajar. It seemed there was a designated hierarchy to their grouping. Closest into the barn was the milking herd, then the beef breeding herd and finally three of the four fattening Jersey steers. The smallest fattening steer, looking like a black-faced teddy bear, was standing at the gate staring in.

Now that the weather has warmed up, the cattle are grazing by day in the field and returning to the barn at night for water. We save on hay and avoid the chore of breaking ice on the field water trough.

The sheep and goats were also in the barn. The only remaining kid from 2011, a female goat called “Little One,” was in her own pen, as we don’t want to breed her for another year. They are not going outside so this decreases our hay faster. It will be nip and tuck to ensure supplies last until the new grass is strong enough to withstand grazing.

Roxy continues to have the boar for company. They are still a bit testy with each other. Roxy was limping on one foot, which could have been the outcome of a fray. However, she had just risen from her thick straw bed, and sometimes her leg goes numb when she lies down for too long. Farmer Jeff finds the boar a big talker, along with our Jersey cow Molasses, whom he has nicknamed Sassy. They disturb the peaceful silence of the morning for him, as he enters the barn for chores.

I had a chance to observe the last two of Roxy’s piglets lying asleep, with their bodies touching. They did not look big enough for market but they were solid and long. Evidently Farmer Jeff knew better, and he had already booked them into Dee Jay’s Organic Processing in Fredricktown. They weighed in at 440 lbs. between them. This is a perfect size for a bacon pig as proved by the delicious, meaty bacon last fall.

As I returned to the education building at the end of my walk I passed the young hens in the children’s garden enclosure. They scrambled out of the low, square door in the hen house to see if I had any fresh greens. I laughed at a late-comer who fairly danced across the mud to avoid dirtying her feet. It does not take much to lighten up a grey day.

Maple sugar tours will be offered the first three Saturdays in March, with our traditional breakfast served on Saturday, March 17, coinciding with St. Patrick’s Day. Please see our web site for reservation details.