How a Child Views a Lamb Meatball 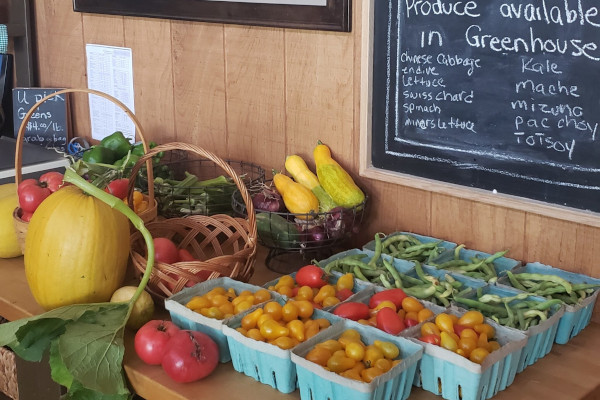 Published in The Delaware Gazette: October 15, 2013

The annual Harvest Fair, held the last Saturday of September at Stratford Ecological Center on Liberty Road, was held on one of the many beautiful days we have experienced this fall. The weather encouraged families to venture further away from the main activities on the lawn and in kids’ world, and discover new wonders. Board member Dan Manring and wife Beth brought their daughter Jill Burner and granddaughter Riley, who invited her neighbor friends Drew, Shelby and Emma Rice.

Riley had been to farm camp and she loved re-connecting with the cats, especially people friendly Max. Drew discovered the pond. He was enthused about the big weed he caught, but did not seem the least perturbed about the fish that nibbled his worm and always backed off. Shelby had been out to the barn to visit Roxy and observed “Man, that pig is BIG.” Emma was proud to sit on the front seat during a wagon ride, and was intrigued with a tree house she discovered in a fallen tree.

The yellow jackets have been a problem this fall, especially around visitors with any food. Last winter was long but relatively mild, and it did not reduce their numbers. Farmer Jeff would actually welcome a frost, if it meant we went quickly into a hard winter to combat such problems, including animal parasites.

After the ground freezes we will harvest the corn. During a four-hour farm tour 5th graders from Bailey Elementary experienced the corn stalks in field 7, up close and personal. They played a game of hide and seek in lieu of the conventional maze. The stalks were noticeably short, with only one ear apiece. Farmer Jeff thinks that grazing the hogs there for an extended period last fall lowered the ph, causing the stunted growth. A soil test will show if this is true.

Cultivating the clay soil fields is becoming noticeably more difficult after the weather patterns of the last few years. The heavy rains cause the water table to rise and when the table drops, a hard pan remains about eight inches below the surface. This pan, along with the remains of the deep rooted forage crops, means we have to work the fields more times. First we disk, then chisel twice, disk again and finally harrow. If we don’t break the pan the ground remains hard, the micro environment changes, unwanted foxtail grasses overtake desired grasses, and the water table does not get recharged.

Dave Noble, Stratford’s beekeeper, shared a story about lamb meat. He had purchased some, and with his daughter Natalie made meat balls. Natalie remarked: “It‘s kinda weird to think that I may have known the lamb that this meatball is from.” Her Dad replied: “Well it used to be that you always knew the animal that your food came from, whether you hunted it or if you were a farmer.” There was a pause and then Natalie responded: “I guess in a way it is kinda cool; I spent this summer taking care of and feeding the lambs and now they are taking care of me by feeding me.” Bingo!! Dave was elated she understood what it means to be thankful. I agree that is kinda cool.

We lost three roosters, but not as a result of predators. They were originally purchased in the hope they were female, but alas not so. They weighed around thirteen pounds, and were sent to a new poultry processor near Ostrander. Farmer Jeff received a call from the processor’s young daughter, who had obviously taken a shine to the beautiful “Buckeye” breed birds. In a voice that would melt your heart, she asked if he would be willing to sell her the three birds for $3.00 each. This is somewhat below market value by the usual reckoning! He replied that he wanted to do a taste test on one, but he was willing to sell the other two for a total of $10.00. She happily took him up on his offer.

Two white-faced Corriedale ewes, we named Marge and Sylvia, have been added to our flock. They were generously gifted by Marge Finnegan, shepherdess and spinner. They came from the farm of author Gene Logsdon, our guest speaker last May, who disbanded his flock after thirty-eight years. The ewes and their offspring will be a reminder of Gene’s contribution to Ohio farming knowledge. This heritage breed originated at Corriedale Station in New Zealand in the 1860’s, as a cross between a Marino ewe, originally a breed from Spain, and an English Lincoln ram. In 1914 the US Department of Agriculture initiated a search for a sheep breed that would produce both good wool and meat, and the Corriedale met their standards.

Katie, the horned Devon heifer who failed to conceive, and a steer will go to the processors this month. The beef will be welcome. The remaining animals will be with us all winter, and provide you a great reason to visit us!