Ragweed and Earthworms Thrive in a Field of Oats 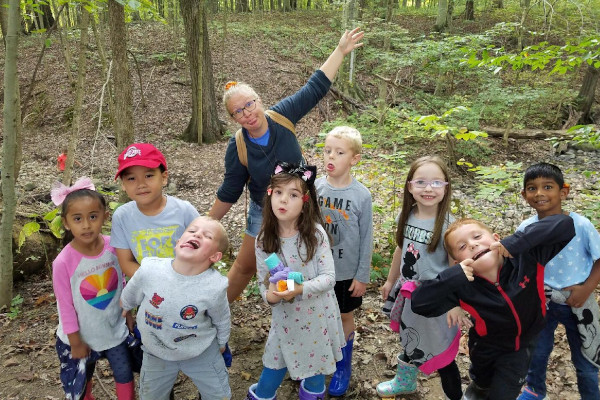 A crowd of farmers from all over the state showed up on a rainy Saturday morning in mid May at Stratford Ecological Center on Liberty Road. They were eager to spend the day listening to David Kline and Gene Logsdon answer questions and lead a farm walk.

Unlike many Ohio farmers, they continue to raise livestock on pasture through the use of careful management, involving forage choices, rotation and daily movement of animals. They believe grazing animals are a must for soil fertility, as they aerate and assist water retention with their hoof prints, and return nutrients to the ground in their cow pats.

David Kline expressed that in order to bring in young people and make our world sustainable, farming has to make money without the farmer working all the time, and it has to be FUN.

There is no doubt that life at Stratford is fun, especially during haymaking when the weather cooperates. Haying has been going on between rain showers since the Friday of Memorial weekend. On June 5 fields 8 & 9 were baled, after the cut grass had dried for some time. It was a beautiful afternoon when we started to load trailers, and the weather held until 8.00 pm. when we placed the final bale on the elevator, to travel up to the hay loft for stacking and storage.

What a treat to have low heat and humidity, lighter bales, and lots of willing help. Farmer Jeff had to contend with the irritating and time consuming problem of the baler string breaking, necessitating re-baling swaths of hay. Regretfully the Brownie Queen did not show up, but for the most part haying was still a picnic for once!

All the corn seed was planted in the south pasture and field 7 by the end of May. This was a good thing, as the later it goes in the lighter the yield, due to the shortened growing season. It is already up and looking strong, without ANY gaps in the rows.

The winter spelt is way ahead of the corn, and had formed seed heads by June 1, a record for Stratford. The winter was long but warmer than usual, and this helped the growth. Farmer Jeff is particularly pleased with the seed variety Maverick. The density of the leaves on the stalk have stalled the weeds, and the uniformity of height will allow him to cut off the heads the second week of July, then make a second pass for the straw, and avoid over loading the old combine.

Last weekend the small greenhouse attached to the education building was emptied of the last of the vegetable seedlings. These were planted in the extended Giving Garden, and the area allocated to U-pick vegetables in field 3. Not only is there more area, but there is more variety, including green beans, peppers and squashes. It is food for the eye just to look at the amazing progress made since planting started five weeks ago.

A moveable three-sided, sloped roof “loafing” shed built by Tim Smykes, an Eagle Scout candidate, was pulled on its runners by tractor to field 6. It remains parked among the lush, flowering alfalfa and an annual rye called Bruiser, which is living up to its name. The shed provides summer shade and winter shelter for the livestock. The advantage of the shed’s mobility is that frequent moving eliminates a build up of parasites on the site.

Two new breeds of chickens were brought to Stratford in early April as day-old chicks and housed by themselves in the children’s garden. Twenty five are a light colored English breed called Buff Orpington and fifteen are a darkcolored breed called Buckeye. This breed, as you could guess, originated in Ohio. All were doing well until two weeks ago, when a skunk discovered a hole under the fence plugged years ago with bricks and wood. He made his way into the hen house and that night Farmer Jeff, hearing nothing unusual, closed the small door on the roosting chickens.

Next morning nine were dead. The rest were re-located across the passageway. The skunk remained in the house. To date we have been unable to trap him, as he is so light he will not set off the trap. We will try weighing the spring with bricks. Meanwhile, we dug out underneath and re-hung the fence. The ground is so soft we had to revert to placing bricks on top, to avoid anything else digging their way in. We tried turning off the brooder light in the chicken’s new home, but they absolutely refused to enter the house until we turned it back on. I can hardly blame them.

Next Monday, June 17, a farm camp for adults runs from 5.45 pm. until 9.00 pm., with a light supper. The topic is horses/harness and farm equipment/tools. It is the first of five consecutive Monday night sessions. The others cover raising sheep, pigs, cows and crops. The cost is $25/session and reservations are necessary please. We encourage you to give camp a try, and widen your knowledge of food production. To paraphrase one of our young day campers, “I am learning a lot at Stratford, while my friends are just hanging out at the pool.”