An Abundance of Grazing Thanks to the Rains

Predators, Parasites and Predicting the Weather

It’s Been a Great Summer at Stratford Ecological Center 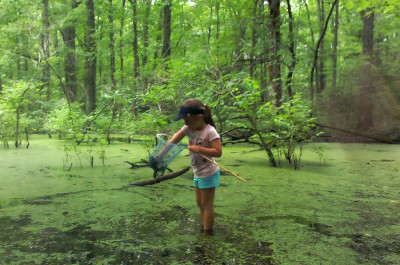 Published in The Delaware Gazette, July18, 2015

Last month Jeff Dickinson, Farmer and Executive Director at Stratford Ecological Center on Liberty Road, kept Gazette readers connected to life on the farm during my vacation in Germany and England. It was exciting, when sharing Stratford’s web site with farming friends on the other side of the pond, to discover his column on predators, parasites, and predicting the weather, and re-connect with life in Delaware.

My U.K. friends too have issues with predators. Last time it was otters, and this time the two-legged type in the form of herons. They have large fish ponds created from land that always flooded in winter, and they cover their living expenses by charging fishermen a daily fee to catch and release the fish. The otters were prevented from depleting the fish by the labor intensive and expensive method of fencing off the ponds. As recourse against the herons they finally resorted to obtaining a permit which allows them to shoot the birds when actually seen on the ponds.

The weather in England was exactly what it should have been here in the U.S. during June: dry and sunny most days, with light rain at night. Southern Germany was becoming desperate for rain after seven weeks of drought during their critical growing period.

Back home, despite nineteen days of continuous rain in June, and many more this month, Farmer Jeff and his crew managed to take a first cutting of hay on three occasions between Memorial Day and July 4. The result is 1220 bales of decent quality hay stacked in the loft.

There is still plenty of grass for grazing. The livestock spend their days in the fields, with the sheep and goats having access to the barn at night. Should the day be hot they seek shade, and then stay out during the cool of night to graze.

For the second year the Oman Brothers in Ostrander have loaned us a Red Devon bull until the end of July. The bull will mate with our beef cow, Sweet Bessie, who unfortunately hoodwinked us into thinking she was pregnant this year when she was not! We are now selling the Oman’s hamburger from their grass fed beef herd.

Bessie’s daughter, Sweet Annie, born in 2013, is now old enough to get in-calf. Sassy, our Jersey milk cow, is the third candidate hopefully producing a calf next spring. Sugar and Pumpkin, our other Jerseys, continue to suckle their calves, and it is unlikely they will conceive despite running with the bull. We like the Tamworth breed of pig as they have a good disposition and are an excellent mother that is when you can get them pregnant! We are hoping to take delivery of an in-pig sow in September, with farrowing around Thanksgiving. Meanwhile, we regretfully continue to have none of those favorite animals on the farm.

On one side of the chicken coop, in the Children’s Garden, are the chicks we brought in at a day old last month, and they are growing well. On the other side and often found sprawled together on the coop floor, are the chickens hatched in April in the class room. They are still teenagers, and begin egg production in September. They like people and are very smart. They are also very large! With so few birds there is little competition for feed and they are over eating. Our older hens and six two-year old newcomers are in the orchard. The latter were given to us, as they were not producing, but their environment appears to suit them and they are now doing so.

The spelt in field 2 should be off by this weekend, weather permitting. The oats and buckwheat in field 6 are ready for haying, although the buckwheat needs to be really dry when that occurs. The corn has established well, but the weather prevented a third cultivation to get rid of the weeds, allowing ragweed to seriously compete with it. The second-year blackberry canes have regenerated from the bottom few inches of the cane, and to our surprise are bearing some fruit. This is an unusual phenomenon, considering most of the cane did not over-winter, and the signal to fruit this year occurred last September in that part of the cane.

Our bees had generated plenty of honey by late May. Unfortunately, due to lack of food sources during the cold wet June, they have eaten a lot of it to keep alive, and there is concern they will have enough food this month. Stratford’s bees have fared better than other local bees as our flowering buckwheat and red clover has helped sustain them, with more clover coming soon and sunflowers in late July and August. We are proud to share that our honey was voted the best, during a blind taste test at the Honey Bee Festival held at Stratford on June 27.

There are still openings for our adult farm camp including an overnight, the weekend of July 25 and 26. We have a good mix of educational and fun opportunities, as well as plenty of home cooked food, for those interested in learning about homesteading. Details, along with other happenings, can be found on our web site. We hope you find time to come out and enjoy the fruits of summer.

Pauline Scott is a farm and nature guide at Stratford Ecological Center, 3083 Liberty Road, Delaware. She can be reached at 740-363-2548 or by email at office@stratfordecologicalcenter.org Website: StratfordEcologicalCenter.org